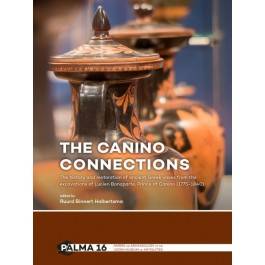 The Canino Connections. The history and restoration of ancient Greek vases from the excavations of Lucien Bonaparte, Prince of Canino (1775-1840).

The Canino Connections. The history and restoration of ancient Greek vases from the excavations of Lucien Bonaparte, Prince of Canino (1775-1840).

Starting in the year 1828, Lucien Bonaparte, Prince of Canino, unearthed more than 2000 Greek vases on his estate near the ancient Etruscan town of Vulci. The vases were restored and found their way to archaeological collections all around the world. This volume publishes 10 papers by scholars of international repute dealing with these ceramics. The papers were presented in 2015 at a colloquium in the National Museum of Antiquities in Leiden, which acquired 96 vases from the Bonaparte collection in 1839. Specialists in the fields of museum history, Greek vase-painting, restoration and 19th century collecting practices from the Netherlands, France, Germany, Denmark, Austria, Italy and Russia have contributed to this volume, which offers the newest insights into the person of Lucien Bonaparte, his excavation practices, the history of restorations and the selling and buying of Greek ceramics in the 19th century. The results have helped to extend our knowledge of the collectors, traders and scholars, who were concerned with Greek vases during the 19th century. Their activities took place in a pivotal period, in which the black- and red figure ceramics, which had come to light in Italy during the previous centuries, were finally assigned to Greek craftsmanship instead of to Etruscan manufacture. The book also contains a concise photographic catalogue illustrating the highlights of the Leiden Canino collection.